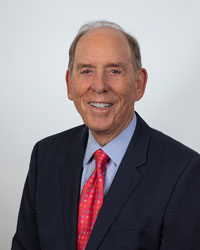 Stephen W. Sessums is a graduate of the University of Florida Law School, where he was editor in chief of the Law Review, president of Florida Blue Key and graduated number one in his class.  Steve has continuously held the AV Preeminent® rating from Martindale Hubbell since 2016.

Steve’s dedication to professionalism is evidenced by his participation and leadership in local, statewide, and national bar associations and organizations.  Nationally, he became a Fellow of the American Academy of Matrimonial Lawyers shortly after the Florida Chapter’s creation and was one of the founding Fellows in the American College of Family Trial Lawyers.  On a statewide level, Steve is one of a select few to serve two consecutive terms as Chair of the Family Law Section of The Florida Bar and was in the first group of attorneys to become Board Certified in Marital and Family Law by The Florida Bar. He also helped write the Bounds of Advocacy, a joint publication of the Florida Chapter of the AAML and the Family Law Section of The Florida Bar, which establishes ethical ideals for family law attorneys.  Locally, Steve is a Past President of the Hillsborough County Bar Association and the Hillsborough County Bar Foundation.

Steve’s dedication to outstanding service to the community is not limited to his law practice.  In 2017 Steve and his wife, Diana, received the Amy Shimburg Volunteer of the Year award from Meals on Wheels of Tampa, an organization in which they have faithfully served since 2007.

Supreme Court Committee on Rules for Mediation and Arbitration

Meals on Wheels of Tampa